On 9-12 August, 2018 Oxfam in Laos organized a distribution of hygiene kits at Pindong and Tamoryot evacuation centers to those who had been affected by the dam collapse in Sanamxay.  It included 320 kits.  Each kit consisted of detergent, shampoo, soap, toothbrush,  toothpaste, towels, clothes brush, nail clipper, with sewing needle and buttons, sanitary pads for women, drinking water (20 liters), plastic bowls, plastic water tank, and a lighter.  After the flood, both Pindong and Tamoryot evacuation centers were cut off due to water levels and heavy mud.  Therefore, the kits were transported by government helicopter. 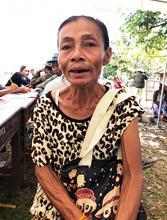 Last month, in October, Oxfam in Laos followed up with another visit and returned to the evacuation centers to determine whether the hygiene kits had been fully distributed and also to obtain feedback from those who had received them.  In both instances, the answer was positive.  They noted that the quality of the kits were high, practical and useful.  However, those interviewed admitted the need for even more kits.  The kits were key to cleanliness and keeping the spread of disease and infection at bay.

One of those who had received the kits was Mrs. Phone, who was originally from Hinlad village.  She expressed her thanks to all those who had donated during the emergency.  However, she added that her family still needed of a new place to call home and much needed every day items such as kitchen items and washing detergent, to name a few.  She and her family of 8 are among the hundreds of other families who remain at the evacuation center in tents.  However, new structures are being constructed on site where they will be moved into. 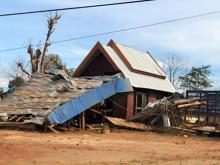 Currently, the Lao government announced that Hinlad villagers would not be allowed to return to their village. Therefore, the village is expected to temporarily remain at Tamoryot village.

Oxfam in Laos continues to assist with the early recovery phase where food security has been raised as an issue.  Oxfam, through our partner CLICK, will be working with locals to help with increasing food availability, farm recovery, increasing livelihoods and income for some of the poorest hit.  Specifically, this project will be to assist Done Bok village through the support of a community fruit and vegetable farm and a catfish farm which will be cooperatively run.  Approximately, 150 farmers and 30 households are expected to benefit from this first round.